Medicare is the Number One Payee for Hospice Care.

Insurers that pay for Hospice care include: Medicare, Long Term Care Insurance, Private Pay, and in certain circumstances, Medicaid will pay for hospice. Here is the breakdown of insurers: (Jump to Lessons Learned)

Long Term Care (LTC) Insurance
LTC is the second largest insurer of hospice, covering about 7% of the care.

Private Pay
Private Pay is rare, but is sometimes used to pay for hospice care when the patient is not eligible for either Medicare or Medicaid benefits.

The most recent and impactful change to hospice is a change in the use of “failure to thrive” as criteria for a dementia diagnosis. In the past, a patient refusing to eat or get out of the bed for weeks at a time would get a “failure to thrive” diagnosis and be placed on hospice. With dementia in the United States being the more prevalent disease amongst seniors over 85, physicians are required to be specific about the type of dementia a patient exhibits. This guideline change helps keep Medicare solvent and moreover, it differentiates a patient who does not want to do anything, from a patient unable to do anything.

This hospice series is dedicated to Mary Ellen Afflitto. Wife, mother, sister, aunt and friend with the most incredible upbeat attitude and wicked sense of humor. She is missed greatly and I am so grateful she was my aunt.

With thanks to my collaborator on the Hospice series, Victor Hudson 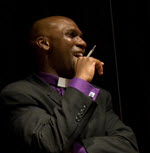 Victor Hudson, Jr., is an ordained minister and church planter. He served in the United States Marine Corps and worked for Pfizer Inc. He currently works at Embracing Hospicecare out of Wall, NJ. He holds three masters degree, one in gerontology from the University of Southern California, an MBA from Regent University’s School of Business and Leadership, and a masters degree in religion from Liberty Baptist Theological Seminary. He is the father of two wonderful adult children, Kieya and Corey, and a proud grandfather of three boys, Javon, Jordan and Jacob. He lives in New Jersey with his wife, Yvonne.

We use cookies to ensure that we give you the best experience on our website. If you continue to use this site we will assume that you give your approval.OK